We met in 2007 studying Tango, with some of the greatest ‘Maestros’. In mid 2010, we decided to start this project, as a fusion of tradition and new sounds. This is how Il Faut was born, first as a duo, later as a trio. With some compositions of our own and some well-cared arrangements, we were covering Tangos from all periods, always printing a personal sonority.

Years passed by and we recorded 2 albums: “Tarde de domingo” in 2014 (sponsored by the National Academy of Tango) and “Avanti” in 2017. We toured 5 times along Europe and the United States (more than 20 cities in total) and the Ministry of Culture of Argentina declared us “Artists of Cultural Interest” in two ocassions. And of course, there were hundreds of shows in milongas, participation in festivals, TV shows, Radio and more. In 2018, Nicolás Fernández joined us in double bass, consolidating the trio sound. We also become hosts of our own independent festival named “Tango Vivo!” that promotes and disseminates the current Tango of Buenos Aires scene.

And as if this were not enough, we also like to give musicality workshops, lectures about the evolution of Tango, DJ for milongas and more. In other words…
Chan Chan! 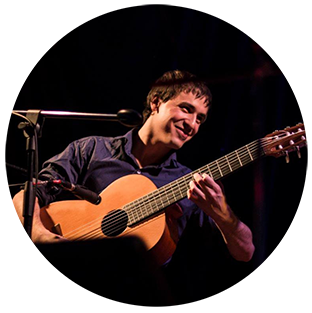 Vocals + Guitar
Guitarist, composer, arranger and teacher. He studied Tango, Jazz and Contemporary Music at UNA (National University of Arts), Tango National Academy and EMBA. He was part of many Tango orchestras, quintets, trios and duos. He tured the globe several times teaching and performing music, produced 5 albums, a musical comedy and radio jingles under request. He has been teaching music uninterrupted since 2005. He is the tireless engine of the trio! 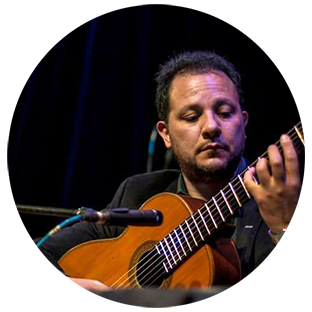 Guitar + DJ
Guitarist, composer and arranger. He studied classical music and Tango at the Conservatory of Chascomús, Tango National Academy and SADAIC. He participated in important seminars and master classes from abroad. He was part of various Tango ensembles and has accompanied singers of different generations. The last years, he did musical tours throughout Europe and the United States. He loves to DJ and dance, he’s the craziest ‘Milonguero’ of the 3! 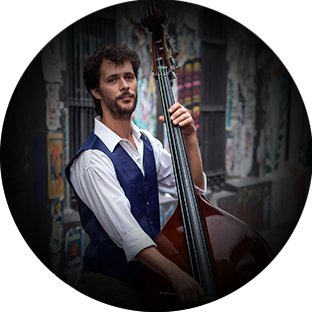 Contrabajista
Double bass player and teacher. He studied Classical music, Tango and Jazz at the Manuel de Falla Conservatory, EMPA and ITMC. He took lessons with some of the major references of Argentina music scene. He integrated diverse formations in different styles, either as a stable member or as a sessionist. He has been teaching classes uninterrupted since 2003. He is the forceful bass sound of the group!

Go ahead and discover all the emotions that Tango has to give. History by history, song by song.
Write us!